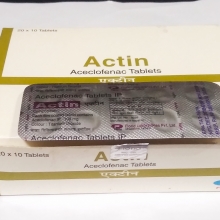 Aceclofenac is a non-steroidal anti-inflammatory drug (NSAID) with marked anti-inflammatory and analgesic properties. It is reported to have a higher anti-inflammatory action or at least comparable effects than conventional NSAIDs in double-blind studies . Aceclofenac potently inhibits the cyclo-oxygenase enzyme (COX) that is involved in the synthesis of prostaglandins, which are inflammatory mediators that cause pain, swelling, inflammation, and fever. It is orally administered for the relief of pain and inflammation in osteoarthritis, rheumatoid arthritis and ankylosing spondylitis. Aceclofenac belongs to BCS Class II as it possesses poor aqueous solubility . It displays high permeability to penetrate into synovial joints where in patients with osteoarthritis and related conditions, the loss of articular cartilage in the area causes joint pain, tenderness, stiffness, crepitus, and local inflammation. Aceclofenac is also reported to be effective in other painful conditions such as dental and gynaecological conditions . In 1991, aceclofenac was developed as an analog of a commonly prescribed NSAID, Diclofenac, via chemical modification in effort to improve the gastrointestinal tolerability of the drug.

Indicated for the relief of pain and inflammation in osteoarthritis, rheumatoid arthritis and ankylosing spondylitis.

Aceclofenac is a NSAID that inhibits both isoforms of COX enzyme, a key enzyme involved in the inflammatory cascade. COX-1 enzyme is a constitutive enzyme involved in prostacyclin production and protective functions of gastric mucosa whereas COX-2 is an inducible enzyme involved in the production of inflammatory mediators in response to inflammatory stimuli. Aceclofenac displays more selectivity towards COX-2 (IC50 of 0.77uM) than COX-1 (IC50 of >100uM), which promotes its gastric tolerance compared to other NSAIDs. The primary metabolite, 4'-hydroxyaceclofenac, also minimally inhibits COX-2 with IC50 value of 36uM [2]. Although the mode of action of aceclofenac is thought to mainly arise from the inhibition of synthesis of prostaglandins (PGE2), aceclofenac also inhibits the production of inflammatory cytokines, interleukins (IL-1β, IL-6), and tumor necrosis factors (TNF). It is also reported that aceclofenac also affects the cell adhesion molecules from neutrophils [A19763]. Aceclofenac also targets the synthesis of glycosaminoglycan and mediates chrondroprotective effects .

Through COX-2 inhibition, aceclofenac downregulates the production of various inflammatory mediators including prostaglandin E2 (PGE2), IL-1β, and TNF from the arachidonic acid (AA) pathway. Inhibition of IL-6 is thought to be mediated by diclofenac converted from aceclofenac . Suppressed action of inflammatory cytokines decreases the production of reactive oxygen species. Aceclofenac is shown to decreased production of nitrous oxide in human articular chondrocytes . In addition, aceclofenac interferes with neutrophil adhesion to endothelium by decreasing the expression of L-selectin (CD62L), which is a cell adhesion molecule expressed on lymphocytes. Aceclofenac is proposed to stimulate the synthesis of glycosaminoglycan in human osteoarthritic cartilage which may be mediated through its inhibitory action on IL-1 production and activity . The chrondroprotective effects are generated by 4'-hydroxyaceclofenac which suppresses IL-1 mediated production of promatrix metalloproteinase-1 and metalloproteinase-3 and interferes with the release of proteoglycan from chrondrocytes.