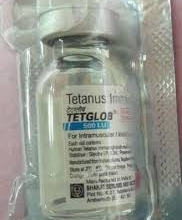 4.2 Posology and method of administration

• 250 IU, unless the risk is thought to be extremely high

The volume of solution that needs to be administered to give 250 IU is stated on the label.

DO NOT EXCEED THE RECOMMENDED DOSE.

Human Tetanus Immunoglobulin should be administered via the intramuscular route.

If a large volume (> 2mL for children or > 5 mL for adults) is required, it is recommended to administer this in divided doses at different sites.

When simultaneous vaccination is necessary, the immunoglobulin and the vaccine should be administered at two different sites.

If intramuscular administration is contra-indicated (bleeding disorders), the injection can be administered subcutaneously. However, it should be noted that there are no clinical efficacy data to support administration by the subcutaneous route.

Hypersensitivity to any of the components.

4.4 Special warnings and precautions for use

Ensure that Human Tetanus Immunoglobulin is not administered into a blood vessel, because of the risk of shock.

Human Tetanus Immunoglobulin contains a small quantity of IgA. Individuals who are deficient in IgA have the potential for developing IgA antibodies and may have anaphylactic reactions after administration of blood components containing IgA. The physician must therefore weigh the benefit of treatment with Human tetanus Immunoglobulin against the potential risk of hypersensitivity reactions.

Rarely, human tetanus immunoglobulin can induce a fall in blood pressure with anaphylactic reaction, even in patients who have tolerated previous treatment with human immunoglobulin.

Suspicion of allergic or anaphylactic type reactions requires immediate discontinuation of the injection. In case of shock, standard medical treatment for shock should be implemented.

The measures taken are considered effective for enveloped viruses such as human immunodeficiency virus (HIV), hepatitis B virus (HBV) and hepatitis C virus (HCV) and for the non-enveloped hepatitis A and parvovirus B19 viruses.

There is reassuring clinical experience regarding the lack of hepatitis A or parvovirus B19 transmission with immunoglobulins and it is also assumed that the antibody content makes an important contribution to the viral safety.

It is strongly recommended that every time that Human Tetanus Immunoglobulin is administered to a patient, the name and batch number of the product are recorded in order to maintain a link between the patient and the batch of the product.

4.5 Interaction with other medicinal products and other forms of interaction

Immunoglobulin administration may interfere with the development of an immune response to live attenuated virus vaccines, such as rubella, mumps, and varicella, for a period of up to 3 months. After administration of this product, an interval of at least 3 months should elapse before vaccination with live attenuated virus vaccines. In the case of measles, this impairment may persist for up to 5 months.

After injection of immunoglobulin, the transitory rise of the various passively transferred antibodies in the patient's blood may result in misleading positive results in serological testing.

Passive transmission of antibodies to erythrocyte antigens, e.g. A, B, D, may interfere with some serological tests for red cell antibodies, for example the antiglobulin test (Coombs' test).

The safety of this medicinal product for use in human pregnancy has not been established in controlled clinical trials. Clinical experience with immunoglobulins suggests that no harmful effects on the course of pregnancy, or on the foetus and the neonate are to be expected.

4.7 Effects on ability to drive and use machines

No effects on ability to drive and use machines have been observed.

Anaphylactic reactions occur rarely and are more likely in patients who have antibodies to IgA, or who have had an allergic reaction after blood transfusion or treatment with plasma derivatives.

For risk of transmission of virus infections, see Section 4.4.

Consequences of an overdose are not known.